After Silent Valley now it’s the turn of Munnar. But unlike in Silent Valley where the projects were just proposed, in Munnar the damage is already done by illegal encroachment and construction. 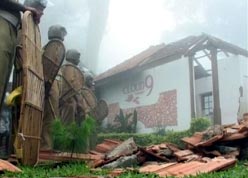 Munnar, better known as the ‘Ooty of kerala’ or the ‘Kashmir of the South’ is one of the central pillars of tourism industry of the state. The number of tourists visiting this paradise on the earth is increasing on an astonishing rate. The relevance of Munnar is more than just a tourist hot spot. Bio-diversity of this part of the state stands second only to Silent Valley in its expanse and significance. Munnar is also well-known for its spices. It is in fact one of the major hub of spices in Kerala. All these factors together make Munnar a unique package of environmental tourism and commerce. A very vulnerable balance which if not kept at right balance would end up in the destruction of environment involved and briefly this is what happened in Munnar.

The soaring tourism industry and other commercial possibilities had long ago made Munnar the dream arena of business people. An establishment at Munnar is considered a risk free and return guaranteed investment. It is a motivation that not many ambitious (or is it greedy) business people can ignore.

However the hunt for the best business possibilities has unfortunately ended up in the illegal encroachment and construction at the forest and revenue lands. The encroachment of land and illegal construction was no surprise but it was a long known fact. But lately, (for the last few weeks to be more specific) the media, the environmentalist, and political parties are busy crushing down on these illegal occupation.

As usual it was the media (the print to be more specific) which took up the issue, but this time the spark succeeded in lighting the torch. Long investigative reports were published specifying how most of these illegal constructers are killing the environment to cut roads or build courtyards and other artificial amenities to market their business concerns. The encroachers has let no government land go waste they voluntarily took up the task of developing these forest land into concrete forest. After all, what does a forest piece fetch in market? But a five star hotel or a shopping complex will fill their pockets with crores.

Let us have a look at the extend of encroachment. The encroachment at the Kannan Devan Hill Village, 12 acre of the land here was illegally occupied by a private party and was leased to Airtel for 30 years to build their towers. The authority to issue ‘Pattaya’ for this part lies with the Collector and it was reported that no ‘Pattaya’ was issued after 1974. Which means the private parties has no legal support. Obviously it is the political support that made him commit such a daring breach of law. Many pieces of land by the way to ‘Chinnakanal’ was also reported to have been invaded. One report also says that JCBs are being used here to clear the forest cover to cut roads to these illegally occupied areas.

Roadside and canal side government land are another area of wide range of encroachment. The market price of land at Munnar is shooting up at an amazing rate that it is currently at par with those at the major cities of the state. That explains why these guys make such a risky investment on encroached land. The revenue lands on the Kochi-Madurai N.H road and Pallivasal head works reservoir are illegally occupied by private parties and large scale construction is going on in these plots.

There is another interesting twist to this story. When the panchayats tried to interfere with the construction works, the invaders earned the permission of the court claiming that they are just reconstructing. But the civilians say that they have never seen even a hut at the site before.

Government had handed over 1428 hectares of Munnar- Devikulam division to H.N.L for the replantation of eucalyptus. These forests better known as Chinnakanal forest belt is also eaten into. There was a report that a Panchayat member of the area was spear heading the invasion. The report also claims that 5 acres of the this land was sold for more than a crore (business without investment, great brains). Many departments of the government such as Electricity Board, Water authority, Public works department own property here which values over crores of rupees. These properties are also targeted in large scale by the invaders. Actually the encroachment does not limit to the governmental properties. Many complaints are being received from the private farms and estate owners that their land is also being illegally occupied using political power and muscle power. Unfortunately often these complaints true.

The twist in the story is yet to come. The report in the media set fire at both camps (LDF & UDF) leaders started to rally the hills of Munnar as expected and kept blaming one another of involvement in the issue. This cross firing helped in a way. It helped in discovering another disgusting fact that members of almost all political parties had their share in the mess. Another fact is that who was ruling didn’t influence any party in their invasion. That means major part of the LDFs invasion was when the UDF ruled it is true other way round also. Some major players exposed include a relative of popular UDF leader. Relative of a ex MLA of Devikulam, a DCC leader, brother of a CPM leader, a CPI leader, the SN group and many more. Everyone has cooperated to best of their abilities in this great task that will remain a shame to the state for ever.

Once again the one and only V.S. Achudanadan fondly called V.S, stepped in. V.S who had been loosing the trust of the people for his wrong decision in matters including the Silent Valley issue has once more emerged as a hero by creating a history of implementing the action of such a huge magnitude and at such a short time frame, efficiently and most honestly. V.S was seen patrolling Munnar just after the reports on the invasion came. His enthusiasm and spirit reminded of his days as the opposition leader. V.S. visited an incredible 17 sites of large-scale invasion in a single day.

He looked his actual self when he dared to confess that members of all parties including his own party had their share in the mess. He also assured the public that no pity will be shown in cleaning up the area and that the big cats will be kicked out first because he didn’t want to sent a wrong message that government is trying to wind up the issue at the cost of the small fishes. The days that followed proved that he meant what he said. His team of officials lead by the popular Rishiraj Singh are busy pulling down big hotels as well as resorts and all other constructions which are illegally constructed. They are showing no mercy and are working in new found spirit in getting against these criminals who had been a shame and a challenge to their departments for a long time.

But it was feared that the way ahead will not be smooth. The CPM state secretariat has asked the CM in writing that the officials appointed on the mission must be reconstituted. However finally the state secretariat seems to have accepted the compromise solution of keeping a new leader for the task force without a any change in the existing team. Task force is led by Collector Raju Narayana Swamy, Inspector-General of Police Rishi Raj Singh, and special officer K. Suresh Kumar (Additional Secretary).

The disagreement with the CPM and CM is connected with the appointing of the three officials who are spearheading the operation. If at all they have any problems with the officials this is surely not the time to show it because time lag is one major reason that kills such operations and changing of officials is going to take time. Another bad news is the threat on life of the V.S. But as a brave man, V.S is not going to let such things interfere his duty.

Until now things look fantastic and government has decided to pass an ordinance empowering the government to declare Munnar a special zone. Many areas are decided to be taken over by the forest department. The greedy bull are trapped for now.