November 14, once again time to conduct discussions and preaching sessions on child welfare, child problems, value degradations among modern children and many more. 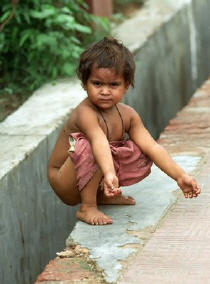 Yes, it is children’s day once again, the day to honour the great leader NEHRU (or at least in papers). Nehru as many other great men was an admirer of children and their childhood. He used to remind us that it is not just a naughty, reckless boy / girl that is hanging on their finger tips but it is the future of our great country. You can lead him / her in the right way and make our homeland a better place to live or make it a hell on earth by just letting him / her accompany evil.

Ok! Fine the plans and decisions taken on this day (usually it ends there – just plans! Plans and again plans it goes on & on & on…no work!) may or will help the children’s in a school, home, orphanages & rehabilitation camps. But are these the only places where you find children? no, NO! You missed a big source ‘THE STREET’.

Of course! The ‘streets’ the most unfortunate and the most neglected children live here. Unfortunate because they are poorest (deep down below poverty line, if officially described) because they are homeless. Neglected because they don’t have identity, no unions to bound them, and no influential personality to talk about their cause and if some one decides to rise voice it is not even taken seriously.

The plights of street children’s are least addressed but the most severe. They have to face almost all the possible problems. Obviously these children go hungry most of the days no money and no food! A fundamental law, but where do these children go for money, some comparably lucky ones get into some odd jobs, but for the rest they take refuge in ‘anti social’ activities and end up in jails. Indian police have a repute (international) in harassment. They are mostly said to practice their martial art moves on these unfortunate (practice makes an art perfect, BRAVO!).

Above all, there are extremes such as SEXUAL HARASSMENT, MALNUTRITION, LACK OF MEDICAL CARE …. they are often not even considered as citizen of the country. Most of them do not exist according to official records.

To build a country that Nehru & Gandhi dreamt, these children’s must be properly rehabilitated. Because these children have a destructive mentality towards the society growing in turn from what the society has given them. This spark of discontentment is enough to shatter all that country has achieved from years of hard work. After all it’s their fundamental right as Ms Roy said “the country does not belong to a handful of bureaucrats and politicians, but to the people, and neither does the world belong to Bush or Blair”.