With its wealth and historical associations and its beautiful settings on a cluster of islands and narrow peninsulas ,the fascinating city of Kochi (Cochin) perfectly reflects the eclecticism of Kerala. 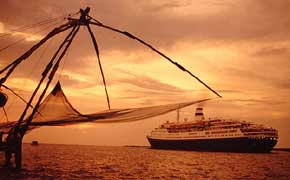 It is not known exactly how the name Kochi (Cochin) originated. But many theories exist. Some historians believe that Cochin is a modified form of the word ‘Cochazhi’ which in Malayalam means ‘small sea’

Others are of the opinion that ‘Kochi (Cochin)’ was named so by the Chinese. According to them, traders from the court of the Chinese ruler Kublai Khan, gave Kochi (Cochin) the name of their homeland. Believe it or not, the chinese fishing nets , found here (outside China) and nowhere else may be sufficient proof to support their belief. Still another theory is that Kochi (Cochin) is derived from the word ‘Kaci’ meaning ‘harbour’.