It is more than 14 years since Kasaragod district was formed. Kasargod is still a backward district. If the development of Kasargod is to be completed. 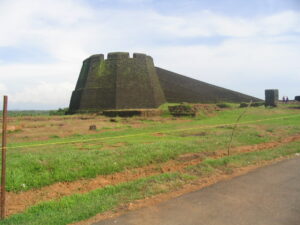 It is with this aim the District Tourism Promotion Council had been striving for the last few years.

Kasargod would occupy a prominent place in the tourist map of India, when Bekal tourism project, worth of Rs. 1000 crores comes info existence.

Lying on the northwestern coast of state, Kasaragod was famous from time immemorial. Many arab travelers, who came Kerala between 9th and 14th centuries A.D., visited Kasaragod as it was then an important trade centre.

They called these areas Harkwillia. Mr.barbose, the Portuguesse traveller, who visited Kumbala near Kasaragod in 1514, had recorded that rice was exported to Male Island whence coir was imported.

“There are three things that can never be retrieved-
the spoken word, time past and the neglected opportunity.”