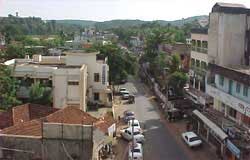 The youngest district in the State of Kerala nestles its head on the slopes of the western Ghats and stretches th the low-ly-ing paddy fields boardering Alappuzha district. It is nourished  by three west flowing rivers – Pamba, Manimala and Achankoil.

It is presumed that the regions presently under the district were formerly under the Pandalam reign which had connections with the Pandya Kingdom. Pathanamthitta now includes portions of the erstwhile Kollam Alappuzha and Idukki districts. Pathanamthitta, Adoor, Ranni, Konni and Kozhencherry are some of the important places taken from Kollam district, whereas Thiruvalla and Mallappally are the major places taken from Alappuzha district.