kerala in a major health problem

Kerala may have robust health indicators for its people but the state is fast falling prey to ‘lifestyle’ or ‘status’ diseases. These diseases owe their name to the changing lifestyle of the people with new gadgets taking over the physically demanding work. 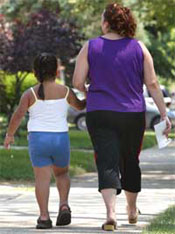 Such a lack of physical work leads to a constant accumulation of destructive fat in the body which conceals silent killers such as hypertension and diabetes on account of the fast spreading phenomenon known as ‘obesity’.

Traditionally a prosperous & healthy man was believed to be the one with overweight and potbelly and an impoverished person was believed to be thin. Now the time has changed and the beliefs have also got its share of logic. To be healthy today means to have a fit body with no visible hangings. The nursery rhyme ‘chubby cheeks ……’ is no longer a good lesson to teach, for a chubby child is no more considered a healthy child. The baby with more bodyweight than medically recommended at the age is at the risk of obese. These lifestyle diseases disturb the body’s balance and will lead to ill-health and increase in the medical expenditure.

Obesity has become a major concern in health research and many scientists across the world consider it as the cause of diabetes, hypertension and cardiovascular disease. The body which functions without a second’s rest day-in and day-out gets imbalanced when some of its organs get unduly burned by the unnecessary fat which is considered major reason for the heart diseases and diabetes.

In fact the number of deaths caused by cardiovascular diseases is much higher than the deaths caused by the dreaded ‘AIDS’ or ‘Cancer’. The Pediatric Cardiology Department of Amrita Institute of Medical Sciences conducted a study about obesity among children recently and one of the major findings of the study was that the number of obese children in Ernakulam urban-rural belt has gone up by 50% in just two years. The parallel in the obesity in children and adolescents is reported to be the most significant factor in the high rise of diabetes patients. These fat children and adolescent are reported to be 12.6 times more likely than non-obese to have high fasting blood insulin levels, a risk factor for type ll diabetes.

Lack of exercises and the fast food culture is costing our children’s health. A small opinion poll conducted will give a better idea. 30% of the students skip their breakfast often, 97% of the students love visiting bakeries and other fast-food huts, 36% regularly visits such fast food centers. A mere 17% eat fresh fruits regular and 39% rarely eat any fruits. 33%spend their leisure time before idiot box (T.V) and computer games. Loss of income is the last thing one will want but WHO reports that India lost over 200 million U.S. dollars on heart diseases, stroke and diabetes.

Unless health planners and people at large are not going to take things seriously, Kerala will have a handful of health problems to deal with in the near future.

‘Education abroad’ no more a ‘dream’ but a ‘need’

'Education abroad' no more a 'dream' but a 'need'