A story packed with humor and subtle dialogues; this desert film rides along a wheel of life situations. The movie contributes to the viewers, nothing but true entertainment.

Arabeem Ottakom P.Madhavan Nairum in oru MarubhoomikkathaThe old laughter of Priyadarsan films spread the theatre and satisfied comedy-entertainment lovers of Kerala, even if it was not in full vigor. Still, the twists of the story in the later half crawled and lowered the momentum. Certain scenes appeared to be as just comedy ‘creations’.

A comedy combination of Super Star Mohan Lal and Director Priyadarshan after a long gap, contributes to the film a special touch.

Most of the location in this film is Abu Dhabi.

A simple, but powerful script of Abhilash Nair stands uniquely in this film produced by Naveen Sasidharan and V.Ashok Kumar.

P. Madhavan Nair (Mohan Lal) is working as an accountant with a firm owned by an Arab, Hosni Mubarack (Shakthi Kapoor). Nair is the most faithful among the employees of Hosni Mubarack ‘just like his soul’ and Nair keeps the most confident information along with his boss.

As many other Pravasis, Nair had a tough time in his home life. He had dedicated his life just for the wellbeing and prosperity of his extended family.

Nair led a routine life, until he met Meenakshi that too with little dramatic effect which later chronicled through coincidences. A romance develops between them. After seeing her, Nair’s life changed positively with some dreams and fantasies.

The arrival of Abdu (Mukesh), an old friend, who is a trickster by nature, adds another angle to the story. Nair refrains from extending a placement to Abdu, when he got a report from his office staff that Abdu had undergone imprisonment due to a robbery. Abdu threatens to assassinate Nair; later as an aftermath, that too quite dramatically. 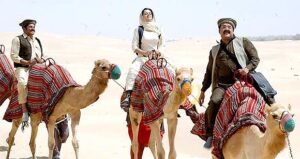 The story turns to yet another twist when Nair had a fallacy that his lover had an affair with his Arab boss. Unable to bear the pain inflicted by the cheating from his lover and adorable boss, Nair breaks down. The drive along a desert hill at gun point hikes heart beat of viewers!

The drive adds still another twist and introduces a novel character to the movie, Eliena (Bhavana) after the interval. This lengthens the running time of the movie, with more comic scenes.

Sudden reappearance of Meenakshi and her narration of real events clear the misunderstandings of Nair and the story proceeds to a positive climax.

Music is directed by M.G Sreekumar. His debut attempt though has raised controversies are relatively good. Alagappan handles cinematography in a superb way. Seven Arts Release distributes the film.