A leader lost to Pakistan and the democratic worl

I received a breaking news alert by the New York Times at 4.12 PM on Thursday 27. “About 15 people were killed by suspected suicide bomb attack outside a rally for the Pakistani opposition leader Benazir Bhutto” the report said. 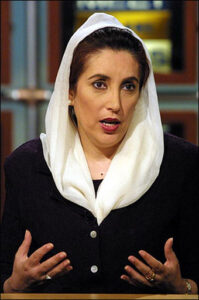 Nothing was mentioned about Bhutto in that piece. I was curious to hear that she was safe and sound. Why no mention about Bhutto, I thought…? There had been a bigger attack and explosion that killed 139 people on the very day of Bhutto’s return in October. Bhutto escaped unhurt on that day. While I was discussing this breaking news with my colleague, around 4.47 PM, the next shocking alert by Washington Post flashed on my desktop.

“Bhutto Reportedly Killed In Suicide Attack.” – By that time this news was out broken like a wildfire. “Former Pakistani prime minister reportedly killed in a political rally, two months after she returned from eight years of exile, officials said” was the report of Post. How did she get killed? There was nothing about that in all these initial reports.

After a few minutes I received an alert mail from Sree Sreenivasan of SAJA (South Asian Journalists Association) quoting Bhutto’s husband that she was critically injured after being shot in the neck followed by the death report of CNN quoting Pakistan’s Geo T.V…

The developments in Pakistan have been always caught with special attention by Indians. We are neighbors’ and partitioned family. We had the similar experience of tragic death of epic national leaders as the result of one or other form of terrorism. Both the nations suffered consequences of political and diplomatic incidents within.

Violence flared in Pakistan after the assassination of former Prime Minister Bhutto. Pakistan has plunged into one of its worst crisis in 60 years. Violence came as feared by all but one wonders what is going on in Pakistan as a whole and what is going to happen to that country?

The assassination has cast doubt over whether Pakistan will go ahead with elections set for January 8th. Who killed Benazir Bhutto? This was the most asked question after the shocking report. As many suspected, the Pakistani intelligence officials disclosed the role of Al-Qaeda in the plot. A tape of Al-Qaeda leaders’ telephone conversation also had been published there after. “The killing has been ordered by Baitullah Mehsud, who is the Al-Qaeda leader in Pakistan” – says the intelligence report. But a spokesman for Mehsud, Maulana Mohammed Umer, dismissed the allegations as “government propaganda”. The government explanation didn’t satisfy Bhutto’s party also.

“The story that Al-Qaida or Baitullah Mehsud did it, appears to us to be a planted story, an incorrect story, because they want to divert the attention,” said Farhatullah Babar, a spokesman for Bhutto’s party. Benazir’s death has made consequences in American Presidential polls also. Some Democrats are pointing fingers at the Bush administration and its management of its relationship with President Musharraf.

Several people have pointed out how Pakistan has wasted billions of dollars in U.S. aid (among other things, money that was supposed to be spent fighting the Taliban was, instead, diverted to beef up defenses against India). Clinton made a statement that Bhutto’s concern for her country, and her family, propelled her to risk her life on behalf of the Pakistani people. She returned to Pakistan to fight for democracy despite threats and previous attempts on her life and now she has made the ultimate sacrifice. Democratic presidential candidate Hillary Rodham Clinton said on Friday that an international probe was vital because there was “no reason to trust the Pakistani Government,” while others called for a U.N. investigation.

As things stand, there are still many contradictory theories on Bhutto’s death. Governement officials have explained something and the press and Pakistan People’s Party speak of a completely different story. Interior Ministry spokesman Brig. Gen. Javed Iqbal Cheema, citing a medical report, said Bhutto was hit on the right side of her skull with shrapnel. Another Associated Press of Pakistan report quotes Dr. Mussadiq Khan saying that Bhutto showed “no signs of life” on her arrival at Rawalpindi General Hospital and that she was pronounced dead about 40 minutes later. Cheema says Bhutto died after fracturing her skull on a sunroof lever in her vehicle. Contrary to previous reports, she did not die from bullet or shrapnel wounds and nothing entered her head, the Interior Ministry spokesman said. Meanwhile international investigation has been demanded from various corners.

Pakistan has a history of political assassinations, a red vein of violence runs through its brief history. Yet, there was a cruel symmetry about Ms Bhutto’s death coming in the same garrison town where her father was executed nearly three decades ago. In 1979, former prime minister and father of Bhutto Zulfikar Ali Bhutto had been hanged in Rawalpindi District Jail. She was only 26 at the time and was smuggled news of his death via their lawyer. She would go on to inherit his party, his popular standing and his fate.

Zulfikar Ali Bhutto had faults and made mistakes but, like his daughter, he had enjoyed huge popular support; as prime minister, he made peace with India, improved ties with China and gave Pakistan some standing and legitimacy in the world. When, on General Zia’s orders, he was sentenced to death, pleas for clemency poured in from world leaders. General Zia was pitiless because Pakistani politics has never left much space for tolerance and forgiveness. The same logic has now condemned Zulfikar’s daughter now to a terrible death.

“It is not a sad day,” said Nawaz Sharif, her former nemesis and main rival for power in the forthcoming election, “it is the darkest, gloomiest day in the history of this country.” He blamed the government for “a serious lapse in security”. “It is the act of those who want Pakistan to disintegrate,” said Farzana Raja, a senior official in her party, the Pakistan People’s Party, “because she was a symbol of unity. They have finished the Bhutto family. They are the enemies of Pakistan.”

President Musharraf also condemned the killing and declared three days of mourning. Ms Bhutto aged 54, educated at Oxford and Harvard, returned to Pakistan from voluntary exile in the West and the Middle East with a good prospect of winning a third term in power in the election scheduled for 8th January. But, from her arrival, assassins dogged her steps. In Peshawar this week, hundreds came to hear her when thousands had been expected, fear of more bombings keeping the crowds away. Finally, in the garrison city that is President Musharraf’s headquarters and should be the safest City in the country, the killers caught up with her.

Pakistan has been an artificial nation created by painful uprooting of the majority Muslim states of British India and shattering them together in a single country. Every step of its way has been punctuated by bloody death and disorder. Benazir was the fourth Pakistani leader in 60 years to die violently. Liaqat Ali Khan, prime minister from 1948, was also killed in Rawalpindi, shot down while addressing a political meeting there in 1951, three years after coming to power.

Zia ul-Haq, Bhutto’s executioner and Pakistan’s military ruler in the 1980s, oversaw the country’s Islamisation. He was the front line in the proxy war in Afghanistan. But Zia also died violently, killed in a plane crash in 1988, the probable victim – although blame has never been ascertained – of rival factions in the army. Civilian rule was restored and Ms Bhutto was elected prime minister later the same year, aged 35. As the first democratically elected woman leader of a Muslim country, her victory seemed charged with significance.

Pakistani electoral officials emergency meeting in Islamabad will decide whether to go ahead with a January poll following assassination of opposition leader Benazir Bhutto. Her 19-year-old son was elected to be her ultimate successor.

Bhutto’s death has aroused many questions. Suspicious covering up of the Pakistan government on the nature of death is the main issue that has been rocking controversy all over.

Love beyond the horizon