CALICUT – A DRIVE TOWARDS CLEAN CITY, HOW FAR?

At Kozhikode, development has become a hazard to residents. Save Calicut - Part 2

Despite, Calicut’s Mass Action Plan against Plastic and the engagement of Kudumbashree workers in clean city drive, coupled with routine works of the Corporation, Kozhikode city and suburban environment are still highly epidemical.

Fever of many kinds and communicable diseases are on the rise in the city. The main reason for spreading viral fever and other diseases spread by mosquitoes is poor sanitation and unscientific waste management, according to medical experts.

Around 608 fever related cases have been reported in Kozhikode district in this season. The official report of fever case is less than 200. But the reality is alarming. Many of the fever cases have not been reported because the number of patients depending on private clinics and doctors are three or four times more than the official tally of fever.

Around fourteen malaria infections are reported in the corporation limit alone. Dengue fever and chicken guinea were also reported from the city and surrounding areas.

Even the hospital surroundings are not healthy, as observed by Calicut net (see the pictures). How the city dwellers can get a healthy environment, asks the environmentalists and social activists. 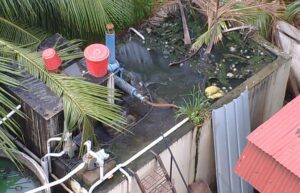 A highly contaminated water tank, where infectious mosquitoes and vectors originate-a scene from a private hospital at Mavoor Road,

The city surroundings are mosquito friendly. While many kinds of fever catch the city, campaigns are other side and realty is unchangeable. The most terrible thing is the surroundings of hospitals. Whether private or public sector these institutions discharge poisonous water to public drainages without effluent treatment. The pollution control board’s norms and conditions are widely misused or misinterpreted. 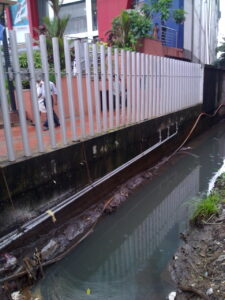 The drainage blockade nearby an ultra-modern shopping mall near Mofussil Bus stand, Kozhikode

Marsh lands in the city surroundings have been widely used for construction of multi-storied buildings. The free flow of rain water is either blocked in the city or overflows into the low lying areas. Around ten major builders have targeted Kozhikode by investing billions for their running projects and future expansion. While the Calicut Corporation and the town planning authorities are justifying the filling up of swamps, due to unavoidable expansion of the city, they keep silence on the remedial measures and projects to make the city clean and tidy. The city has missed a balanced approach amidst irrational town planning, and has to strive hard to move towards an eco- friendly and sustainable development scheme.

The question of sustainable development has not been answered while the growth is marked superficial alone.

At Calicut, Fire and feel of Malayali nostalgia – Onam 2011