Problem of the stray Dogs

Suddenly dogs have taken the center spreads; over population of canines have always been a headache. Every year the public take to streets against these stray dogs and the officials appoint catchers who catch and kill hundreds of these fantastic animals. 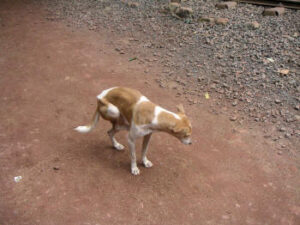 I still remember the heart breaking sight of dead dogs heaped up in a corner of waste ground of ‘Perambra’. Most of the towns of Calicut have considerably large population of stray dogs which the opposition of the panchayats or municipality have identified as a constant weapon against the ruling.

The recent death of a child from a dog attack in Bangalore has brought the issue to the center stage. It is not that these type of incidents do not happen in this part of the state. Though I have not heard of people dying of a dog attack, cattle being killed is often heard-of and attacking the by-passers have become an everyday agenda of the stray dogs here. But the truth is that these incidents could be avoided if the governing bodies had been a bit more serious. It is unpardonable that this kind of cold behavior is threatening the life of the public.

If asked, the governments immediately shift the blame onto the law which actually advocates Animal Birth Control (ABC) rather than mass killing or onto the NGO’s saying they fail to vaccinate or sterilize enough dogs. But an impartial inquiry will prove that it’s the poor governance of the governments which caused such a situation.

One obvious reason for the increase in stray dog population is the availability of enough edible waste. Which means all the towns of Calicut or even India are real paradise to these animals with flesh and fish markets resorting to open dumping grounds to do away with their waste. These dumping grounds are excellent breeding sites for a variety of animal species including rats, flies, mosquitoes, disease – carrying bacteria, and of-course the dogs. Even though every town do not have a hospital or a college, it can definitely boast of one or more such open dumping grounds. Today it is the Dogs and next time it may be Plague or Cholera or even more deadly infections. “Fresh meat & chicken sold here” board with live animals to be slaughtered tied below is a common sight all around the district. The trail of blood and bones left over after the slaughter are then dumped in these open dumping grounds. Which dog will turn down this treat? Stray dogs are a rare sight in the west because there are no visible garbage here. Though there are a lot of laws and rulings against this trend, nothing much is done on the executing part.

Government is waiting for the NGOs to solve the problem for them. They are expected to catch, spay / neuter and vaccinate all the stray dogs roaming the Indian streets. Then what are these governments for? just for making laws? But the Animal Welfare Board of India (AWBI), points out that the number of NGOs working in the field of animal welfare is just 2500. Out of which about a mere 100 are doing the ABC (Animal Birth Control). The rest just run ‘gosdhalas’. The annual budget of the AWBI is about Rs 10crores. Out of which only a fraction is available for ABC which must be shared all over India.

The government is practically threatening the NGOs indirectly to control the stray dog population or that they will be killed in the most inhuman ways (electrocution, strangled, or being beaten to death). The NGOs are left with no alternative but to accept this unjust responsibility and are doing their best to better the situation. But it already late that the government awake to the reality that killing the dogs will never help in solving the problem because the vacuum left by those left will be soon be filled with the newborns.

In Delhi, a concerted effort at dog removal in the early 1970’s killed a third of the stray dogs with no visible reduction in dog population. The Chennai killings also resulted in the emergence of a thriving industry of Dog Leather. The only permanent solution to the problem is to sterilize the animals which will not only help in population control but also will help in keeping the Rabies under control. This is because sterilization will make them Docile since the hormonal urge to mate and its resulting ferocity will be absent. As dogs are highly territorial animals, they will not allow a intruder into their territory thus forming a natural barrier against trespassers. Chennai and San Francisco saw the first successful implementation of ABC.

It is also important that the waste dumping of the slaughter houses is controlled and all the visible dump yards must be closed. No food means no dogs. The unregistered breeding must also regulated. Because the old animals which can no longer breed are thrown away the stray dogs of Ooty are mostly costly breeds such as beautiful Alsatians, Pomeranians etc.