CalicutNet > Articles > Geetha > Who is wrong?

Democracy is making people crazy! it is said that democracy is rule by the people. What difference it makes when compared to autocracy? Everything depends on the attitude of the human being who is an autocrat or a democrat? 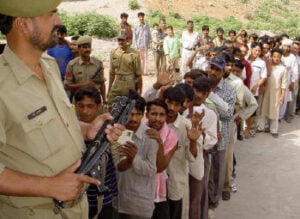 Is it true that the decision is taken by the masses? never! it is the leader who is powerful among others who dictates terms. His followers have no other go but to clap for his decisions. During aristocracy the king used to rule. Now the number of kings only increased. the style remains the same.

Another disadvantage of democracy is that it will never do good to the country because of the fact that dirty politics which is the common factor in all political parties will only do good to the party. Not to the common man who is no part of the politics. Government policies will be opposed by the opposition parties because it is their duty to do so. Will anything good happen in a home where members are fighting each other? Party politics will only create competition and rivalry.

They will agree with each other in one aspect only. Increasing the salary and allowances of elected persons. CAN ANY BODY SHOW ME AN EX MLA OR EX MP OR EX MINISTER GOING BANKRUPT? or their families in adversity? This is the darkest side of democracy the makers of this political system could not foresee (or were they conveniently forgetting that) Every party is speaking volumes about their principles. Do such a thing exist? if at all it exists, it is nothing other than getting into power.

Stop all the parties. let people rule! let there be no rivalry and bloodshed in the name of politics. Then what difference it makes between religion and politics if both ends in bloodshed?

– Geetha
Writer can be contacted on e-mail geetha_1260(at)yahoo.co.in. Please replace (at) with @