US is not as fascinating as it used to be

The global meltdown made a crucial impact on the educational and professional scenario in the US. The number of immigrant students has been diminishing, according to a research conducted by Kauffman Foundation and UC Berkeley School of Information, few months ago. 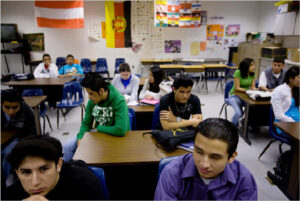 The study report “Losing World’s Best and Brightest” Part V details the serious and long- lasting consequences of global financial crisis. This would affect the economic and social future of the US, says the report. The new trend doubles the chance for developing countries like India, believe analysts. Getting back, the high-powered work force and entrepreneurs are the positive side for India.

Foreign national students have participated in large numbers in some of the most advanced academic researches, lending enormous brainpower to the development of technological and scientific innovations that benefited America.

According to new study, the percentage of students who want to stay in the U.S permanently, have come down. While six percent of Indians want to stay, Chinese percentage is ten and European, fifteen. The majority of respondents want to return home within five years.

The most popular areas of study among Indian students were Engineering (51.1), Computer Science (16.9), Biological Sciences (6.4), Business and Economics.

The report was made on the basis of a survey administered online. Around fifty-five percent of Indian students do not intend to remain in the U.S for very long after graduation. The lack of new opportunities in the time of downturn and the cost control of big companies’ due to economic revival policy are the major factors that pull back the immigrants. Many students want to stay with friends and relatives in their home country.

The vast majority of foreign students, 85.1 percent of Indians and 85 percent Chinese and 72.4 percent of Europeans are concerned about obtaining work visas after graduation.
When their intentions turn into actions, the departure of these foreign nationals could represent a significant loss for the U.S. science and engineering workforce, in which immigrants have played great roles over the past three decades. Foreign nationals are also represented disproportionately among the ranks of founding executives at technology firms around the U.S. The economy of the U.S. would shortly lag behind global growth rates, they believe.

However, many feel the difficulty of having a good pay job in the US. Conversely, 55.6 % percent of Indian students stated they were not very or not at all concerned about obtaining permanent residency in the U.S.

The respondents have good confidence in their home economy.

Even if Indians and Chinese found the U.S much better than their home countries in education, independent thought and overall quality, still many opt out America for work and permanent living. More Indians are interested to start their own business in their home country than in the U.S. The percent of Indians who want to start their own ventures back home is 54.7 while Chinese respondents interested in starting a business is 52.5.

Non-profit organizations and NGOs are laying off staff and cutting back aid programs as the global recession bites, and the prospects for 2010 also look bleak, a report by the UK-based Charity Commission says. In its latest update the Commission, reports that 64 percent of charities with an annual income of over £1 million (about US$1.48 million) say they are concerned their services or funding might be greatly affected.

Indian respondents in general considered quality of life in the US was somewhat better than they had expected. The respondents generally believed that the US economy would not continue to grow its historical pace and that the economies of their home countries would grow faster. However, President Barack Obama is working hard on job recovery. He has promised recently to speed federal money into hundreds of public works projects this summer, vowing that 600,000 jobs will be created or saved. However, many are skeptical on this.

Recent Associated Press-poll found that 41 percent of those surveyed had disapproved of Obama’s handling of the deficit, his highest disapproval rating on any subject polled. Other surveys show that the public is particularly attuned to government spending and the amount of red ink in the budget. These projects mainly aim to ensure job for American nationals.

Another important factor of losing immigrant talents was a perception that economic opportunities in their home country were better.

Entrepreneurial aspirations, but not in the U.S.

Seventy-four percent of Indians, 77 of Europeans, and 70 percent of Chinese students indicated that they wished to start a business within the next decade.

Many students are concerned about the job opportunity at this time of crisis. Many believe, they would have difficulty to find a job in their fields in the U.S.

A tribute to Madhavikkutty (Kamala Das)