CalicutNet > Articles > T. P. Gopinath > One and only Narayana Murthy

One and only Narayana Murthy

Narayana Murthy, the great Infosys founder, stepped down to follow the rule that the retirement is at 60 in his organisation. A rule, which he himself as the person in charge led to establish. This is called setting an example.

Infosys was established in 1981 with $250 by six software engineers with most of the money borrowed from the spouses of the founders.

20th August 06, his 60th birthday is also the day he stepped down from the executive chairmanship of Infosys Technologies, handing over the reigns to Nandan M Nilekani. He will now continue as non-executive chairman and mentor. He could have easily stepped aside that constraint of a rule without anyone in his company or his country complaining. 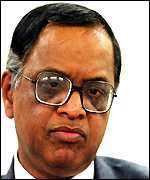 His act of relinquishing the supreme position in Infosys, which of the Executive Chairman of Infosys, is an example for others. This humble demeanour and great perseverance in leading his company were also the pillars of the company’s phenomenal success. He was at the company’s principal position for 25 long years, nurturing it with all his energy and knowledge.

How many of our business owners can show the fairness to follow rules in their own organisation? They try to live life the way they like, leaving the rules and regulations for ordinary employees to follow.

In one of the get-together organized by the company at their Mangalore campus, he stood in a queue to choose his food like every other Infosys employee. He is surely doing the same every time he is under the similar circumstances. He can easily use his privileged position to break the rules, but he chooses not to. It takes a lot of traits to be a great leader; whether in business or life.

He has shown a leadership, a very different kind of leadership than we normally see around us.

It is known that there was a stage after many years into Infosys’s founding, when it was assumed to be not successful in creating business. At this stage, the entire idea was questioned and one of their partners left. This early partner of Infosys is now in the US. Murthy has supposedly told the rest of the partners that “even if all of you want to leave, you can”. “Nevertheless, I remain convinced in the idea and will continue on my journey”. He was focused, confident, and his vision was never blurred.

Mr. Murthy went onto create one of corporate India’s greatest success stories of all time.

He is an example for all Indians to follow. All of us tend to think that the rules are for others to follow, while it was created for all and for the welfare of all. Unless you follow those rules set by you, how others are expected to follow it?

It is not a joke to be on Infosys’s highest spot. It is a great privilege and one enjoys a lot of power and exposure to the media while in Chairman’s seat. For Murthy, his company’s rules were more important than the limelight and power.

He and the company he founded must be held in the highest regard and looked up on with reverence by other would-be business owners. He is known to start his day cleaning his toilet. 1.2 billion $ worth and yet he is also known to live a modest life. What more is required to call him one of the greatest Indian and the best Indian businessman ever?

Those who believe in what they believe and persevere, will be ultimately successful. That’s what Murthy’s life teaches us. It is not for weak individuals to follow rules; it is for those who set examples for others.

Murthy was the fifth of eight children of a school teacher. As a teacher, his father must have instilled in him the greatest qualities of a human being such as humility which he meticulously followed and nurtured throughout his personal and professional life.

His capital was also his fine education; engineering from Mysore University and MTech from IIT Kanpur in 1969. He is an example of such a rare businessman who had only the knowledge and conviction as capital. There is another fact about him that deserves commendation. The fact that he loved and believed in his country! He stayed on in India after post graduation from IIT.

We must also appreciate that many others worked hard to create today’s Infosys. However there would not have been an Infosys with out the leading light that is Murthy. The traits he was founded on, as an individual, given him the ability to show the leadership and guidance which led to the creation of this world renowned organisation.

The following statement by him during an Interview on leaving Infosys, shows how committed he was to his beloved company and yet steadfast in doing the right thing. Surely, he was an ordinary individual doing extraordinary things.

During the interview, he said, “It is like giving away your daughter in marriage”. “You are happy because she has grown up to be what she is – a confident youngster, that she has joined somebody with whom she finds joy”. “At the same time, you remain anxious about her, you feel a sense of loss”.