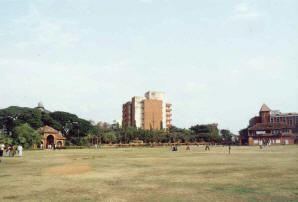 Calicut (Kozhikode) on the Lakshadweep Sea, has been known throughout history as a significant port for trade and commerce.
Its importance was further enhanced in the 10th century when it became the the capital of the powerful Zamorin dynasty. Known also as Calicut, the quality cotton , calico is believed to have originated here.
Today Kozhikode retains its role as an important centre for timber and boat building. It’s a thriving city with evidence of wealth and enterprise- the fruits of Malayali labour in the Middle East.

A bustling city and commercial capital of Malabar, Calicut has an International Airport, University, Medical College and prestigious Indian Institute of Management and National Institute of Technology to its credit.

Calicut has a very colourful past. Vasco da Gama landed at Calicut (Kappad – 16 KM from the city) in 1498, becoming the first European to reach India by the sea route around the southern cape of Africa. His arrival heralded the period of Portuguese supremacy in India and the history of Calicut after 1498 was certainly dramatic. The Portuguese attempted to conquer the town, the capital of Malabar under the Zamorins, or lords of the sea.