In the most astounding terror attacks ever on Indian soil, ruthless, well trained and equipped terrorists stunned the country into anguish and pain. Mumbai is bouncing back to normalcy after prolonged hours of dead anxiety over bloody terrorism. But even at this hour of resilience, we Indians have been deeply scarred in our mind. It might take a long time to get rid of this new dreadful form of ‘direct attack with weapons’ terrorism. 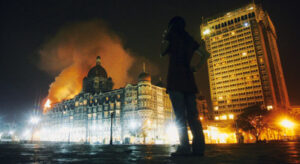 November 26 was a sleepless night for every Indian. The news of India’s financial capital going under siege, shocked the whole of the nation. The terrorists targeted iconic symbols such as Oberoi and Taj hotels to quench their blood thirst for what they called ‘jihad’. Different from all previous attacks, Mumbai’s life was completely paralyzed for days. This was an open attack and challenge against India, just like in a war.

During the encounter with terrorists, our forces have encountered, from all indications, Let (Lakshar e-Toiba) from Pakistan. We lost precious lives of brave and young commando Major Sandeep Unnikrishnan, chief of Maharashtra Antiterrorist Squad Hemanth Karkare, additional commander, Ashok Kamke, encounter specialist Vijay Salaskar, and National Security Guard commando Gajendra Singh. Let us salute these brave souls who sacrificed their lives for our motherland. Let us salute their valour and presence of mind.

There had been car bomb explosions, suburban train attacks, and serial blasts in Mumbai’s recent history. But Mumbai’s life was not crippled the way it was, this time around. The miscreants’ agenda has met with success when they killed many and received unprecedented global media attention.

Terrorists who attacked Chatrapaji Shivaji Terminal, the heart of the great city’s mobilization, the iconic monuments of India such as Hotel Taj Mahal and Oberoi, arrived in Mumbai by boat from Karachi.

Does terrorism have any religion? The debate may go on. But the answer should be “NO”. Just look at a comment from an Ethiopian man on Skynews.com immediately after the attack. “I am a Muslim living in the Addis Ababa, Ethiopia. “After seeing what has happened in India, I just cannot believe any one who claims to be a proper Muslim can cause or inflict harm on another human in this way, regardless of their beliefs”. This has been the reflection of a true believer despite his nationality.

Terrorism is undoubtedly a foe of every religion, points out modern leaders and philosophers alike. Mumbai attack came from across the border, according to Indian authorities. Pakistani ex-soldier has trained the terrorists who terrorised Mumbai. Pak sponsored terrorism has been targeting Indian cities since many years. They need Kashmir issue to be discussed internationally. Indian financial, technological and educational sector growth make our neighbours very nervous.

While addressing a conference of senior police and security officers in New Delhi, just two days before the Mumbai attack, Prime Minister Man Mohan Singh said “India cannot afford more terror attack” But the worse has happened soon later on. Few Jihadists could terrorise the nation for a few days together.

Afghan president Hamid Karzai recently expressed his view against terrorism in an article. He cautioned against political backing of extremism. He said that “we should have a safer life not only in Afghanistan but also in India and Pakistan and the rest of the world.” When the whole world is trying to root out terrorism, India is becoming victim of the deadly attacks again and again. Terrorists have sleeper cells all over the nation. Some local organizations have strong links and support systems also.

There is a nexus among politicians and some fundamentalist organizations. The media has been full of stories of the dirty compromising nature of politicians with miscreants. Mumbai attack is an eye-opener to all the politicians who often try to politicize the incidents and target vote bank. In the beginning opposition leader L.K Advani responded apolitical. Gradually, he altered his voice. He didn’t even attend the all party meeting. We have to learn from America. After September 11 attack, Americans joined hand together and announced a “war” against terrorism. The U.S. military is preparing to have 20,000 uniformed troops inside the United States by 2011 trained to help state and local officials respond to a nuclear terrorist attack, said a Pentagon official recently. This shows U.S’s alertness against a possible future attack. But in India, politicians are playing dirty games for vote-banks and doing nothing more.

The delay in planning and implementing an intelligence network, governmental delay in operations, lack of advanced equipments to save the life of commandos and police have become new lessons to India. The remote controlled terror camps can pass over the visuals to the Jihadis’ satellite phones, mobile, or laptops. When the miscreants are well-prepared with such advantages, it is high time to re-define our security systems. It is a time for action, not for compromises. It is the time to lash out at the terrorist camps in the Kashmir valley and other places. We need a leader with tremendous diplomacy, vision, tactics and willpower like Indira Gandhi. If the government is not taking hard decisions and fighting back terrorism centers, India’s security will be in even more danger. India’s image among the whole world will not be same as it was. Its consequences will be more deep and irreparable. It is time to awake all Indians despite every difference.

From this fiasco, though deeply painful, we have learned a valuable lesson. We have learned that India is open for an AK47 and other kinds of attacks. Repeating the same mistakes we have made, would be unacceptable. Next time they strike, if at all they dare, let us finish them before allowing them to touch us, thereby protecting citizens of this great nation and their spirit.