Barack Hussein Obama’s historic victory in the U.S presidential position is being discussed everywhere. Diplomatic experts have commented “the change” that might be brought to the U.S and around the globe under an African-America presidency.

Washington Post reported: ‘Sen. Barack Obama of Illinois has been elected as the nation’s 44th president riding a reformist message of change and an inspirational exhortation of hope to become the first African American to ascend to the White House’. 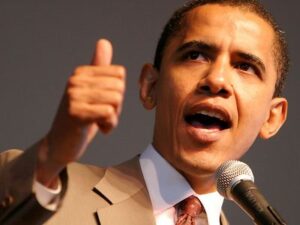 Indian media also focused on Obama’s groundbreaking victory and follow-up reports with utmost importance. Majority of the media tried to link ‘Obamism’ with ‘Dalitism’ in India. Some newspapers compared Obama with Dr. Ambedkar and some others described him in a position such as Mayawati’s in Indian context! It is very strange to evaluate a personality by pronouncing his class and creed. Even Obama is a representative of mixed birth; success and credit belongs to his abilities and charismatic leadership.

Making true the famous pronouncement by the great Martin Luther king, which said, “I have a dream that my four little children will one day live in a nation where they will not be judged by the color of their skin, but by the content of their character.”, Obama conquered opposition that tried hard to stop from becoming the first black American president, through an emphatic victory.

Race crazy people celebrated ‘black’ representation as best as they could. Obama himself came out and clarified that he is the representative of whole of America; but most remained focused on his ‘colour’ code. As far as India is concerned, democratic triumph or America’s ‘colour’ code didn’t matter. India’s anxiety is only about Obama’s policy objectives and positions.

Major issue as far as India is concerned, has been Obama’s statement and views regarding Kashmir which India always described as its integral part ruling out any third party involvement.

During his presidential campaign, Obama had some focus on Kashmir. “The United States should try to resolve the Kashmir dispute”, he opined. In an interview to MSNBC he said “We should probably try to facilitate a better understanding between Pakistan and India and try to resolve the Kashmir crisis so that they can stay focused not on India, but on the situation with those militants,” Later he clarified, “If elected president, he would support the ongoing Indian Pakistan effort to resolve Kashmir problem.”

Obama’s comments on Kashmir did make Pakistan happy. According to Obama, without Pakistan’s support, Taliban militancy can not be curbed. In his article in Foreign Affairs, Obama wrote, “I will encourage a dialogue between Pakistan and India to work towards resolving their dispute over Kashmir”. If Pakistan can look towards the India with confidence, it will be less likely to believe that its interests are best advanced through cooperation with the Taliban.”

Obama’s initiative to link Afghanistan with Kashmir is questioned by India because that is similar to Pakistans position. He didn’t mention anything on Pak-sponsored terrorism on the border. Obama’s statement in the beginning of 2008 that he would try to resolve the Kashmir issue marks a bad signal to India. Even the Secretary General Ban Ki-moon has ruled out intervention in Kashmir.

India need not allow any international intervention in Kashmir which is an integral part of India. A government with strong will power can solve Kashmir issue with composite dialogues. Sponsoring terrorism in border and inviting international attention and finding a solution to Kashmir is an old style strategy. Pakistan’s hidden tactics have failed since the partition and the war.

Kashmir has been integral part of India. Border intrusion, occupation, and sponsoring of terrorism never helped Pakistan to get international sympathy. Coming days would be crucial for Obama. There are many foreign policy challenges including Iraq and Afghanistan before Obama. Foreign diplomats had emphasized Obama’s move to Pakistan in order to get ground support to root out Taliban. Kashmir issue has no similarity with Afghan or alike. Kashmir dispute is an internal matter of India and that has been India’s clear position on the issue and we oppose making it an international issue.

India warned Obama on his unwanted statements: The external affairs minister Pranab Mukharjee has asked him to focus on domestic issues and leave Kashmir issue to India alone. On the other hand, India can show the world its strength by resolving Kashmir issue once and for all.

If Satwari shrine in Jammu is a reality, where Hindus and Muslims join together to offer prayers, that is the significant part of Indian diversity and strength. Indian political will power is the need of the hour to unravel the issue, according independent diplomats. India can resolve Kashmir issue by taking a political decision too, considering the legitimate demand of J&K people. So Obama can leave Kashmir issue to India.

Democracy on Wheels, Corruption on Wheels