The states own architect

The nation is now celebrating the Ash-Abhishek marriage, The media has already set their reporters to hound down the couples for some tickling photos or news (or is it gossips), but how many of you knew the demise of the one and only Laurie Baker – the adopted son of our land. The world famous architect and one of the foremost environmentalists of our time.

Photo: The type of designs Laurie Baker designed and promoted – They were unique in their concept and style. 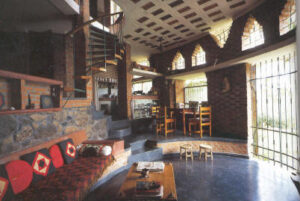 Baker was born in a middle-class family of ‘Birmingham’ of London as the youngest of the four of an accountant. The turning point which made this foreigner decide to devote his life for the development of the people of India was his meeting with Mahatma Gandhi who asked him to return to India and use his talent here. In 1945 Baker was back to build hospitals and buildings to accommodate leprosy patients in Utter Pradesh. The work demanded lot of traveling. Thus he traveled through the length and breath of North India.

These journeys around India were the base of his vast knowledge on the local style of architecture and the use of local materials which later made him a popular economy designer. It is in these travels where he met Dr. Elizabeth who later became his better half.

Laurie Baker better known as ‘pavangalude perunthachan’ (the architect of the poor) in Malayalam, had so deeply merged with the climate, culture and life style of Kerala, that his simple architectural designs won the hearts of the people and the experts for its simple, blending, cheap and eco-friendly nature.

Laurie Baker’s Philosophy of building was to build homes rather than just houses. That is; his structures gave primacy to the people and their life in the building rather than just looks. His designs allowed enough natural light and air flow to keep the residents fresh and vibrant. At the same time his designs costs significantly lower than the conventional style because it used locally available materials for construction and avoided needless decoration and finishing work.

His portfolio already includes over 2000 ‘homes’ which range from those of IAS officers to poverty stricken fishermen. His designs has thus fascinated people of all walks of life for its cost effectiveness, practical bend and cuteness that Baker was sought to design many Churches, Schools and colleges, hospitals, factories, and offices.

Baker’s designs had inducted the confidence in the common men to own a perfect home
which has contributed significantly to the statistics that over 75% of the Malayalies own house. Laurie Baker’s work was not restricted to architecture alone. He was an active environmentalist (the state would have been eager to know what he had to say about the silent valley issue if he was alive), he always spoke and wrote against the over-exploitation of environment by the state.

Considering his overall contribution, the nation honored this gem of a man with ‘Pathmashree’ in 1990.

Silent Valley under threat once more