Is it not better to wait for more maturity?

Marriages are held in heaven. But the debate on marriages at 18 is held in all over India, especially in Kerala. The law commission has recommended the minimum age for male marriage is 18. A reduction of 3 years form existing 21 years minimum. According to commission both men and women can marry at the age of 18; an equality slogan in wedding also. 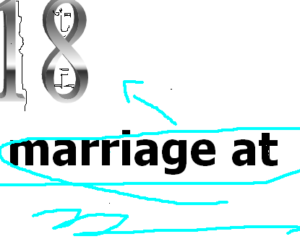 There have been different views on this regard from various corners since the announcement of commissions recommendations. Social thinkers and psychologists say cutting down the minimum age is not a healthy sign because at this age males are not mature enough to lead married life and face its challenges. Some have opined that the rate of divorce and suicides may be increased. But voice from school, college campus in general supports law commission view.

In the time of information revolution, teens are more matured in all aspects of life, according to some supporters. They get education and guidance enough for leading a married life, the promoters justify like this. But the question is how will be the attitude of an 18 year old boy to his married life? He may take it also as simple thing just like making a friendship. The family rapport, understanding, facing of day to day challenges, income generation for family maintenance etc are very important aspects of married life. Even in matured marriages there have been lots of problems. Suicide among youths has increased recently. There are also many psychological issues behind this issue.

Unemployment among educated youth has been an alarming issue for many years. However still there is a fast development in higher education including professional courses. Even girls are pursuing studies after graduation. This means at the age of eighteen many are students. If they are married in this stage, probably most are unable to continue their studies and find a good job for better living. Looking after children at the tender age is also a challenge to many. Some social activists say at this age of freedom, if one is married, a big burden is put upon young shoulders; meaning he lose some freedom one way or other.

There are many justifications that support this recommendation such as voting age for every citizen being 18. Then why not one marry at this age? Due to information explosion and globalization, today’s youth are well-learned and know how to live. They are free thinkers at large and matured. These are the arguments of teen marriage supporters.

But the other aspect is not all teenagers are privileged. Not all are highly learned and internet savvy. A small amount of teenagers are benefited of advanced knowledge. But the majority of youth live in villages. They are struggling for better lives. Even though most are highly qualified, they have no job. They can’t even imagine a married life, when their own lives become a burden to move. While discussing the early marriage offer, a middle aged man said with a little bit of humor:

“If boys are married at this tender age, parents may have to look after their children too!”

The need of sexual education in schools is also important. Many discussions are being held in this direction. The implementation is not so easy while considering its psychological and social aspects. Counseling to children, parents and teachers are required. Sex education seemed to be still a taboo in Indian education system.

Considering all these things, the implementation of new law will have many consequences, opine many social thinkers.

Can India lead on Carbon capping?

Can India lead on Carbon capping?