The sky rocketing commodity price has made an alarming situation in Kerala. Both middle class and lower middle class are suffering out of this uncontrolled price hike.

Being the staple, basic, main, regular food for majority of Keralites, the price hike of rice is affecting its common folk. When the development mantra is spreading in Kerala, the reality of living standard is still very low among poor and down trodden people. Middle class also are struggling to make both ends meet. Price of essential commodities is rising day by day and there is no control on this by the government. When government is unable to supply rice on subsidy rate, consumers are deceived by the market. 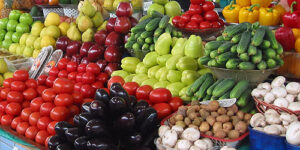 But what is happening to India as a whole? Every time we keep hearing that India is developing fast. But this development is not seen reflected in the lives of common men and farmers. They need basic food items and a basic standard of living. But scarcity in food grain and increasing price has become a great setback to the development.

Coming back to Kerala, our ministers have no time to discuss these serious issues that effects people’s lives. They are looking for media publicity amassed from war of words and controversy. Minister C. Divakaran has been criticizing Milma authorities at their presence on a stage in a public function against the price hike. But at last he justified Milma move in New Delhi.

Whether it is rice, vegetables, or milk, Kerala is facing some sort of scarcity. That is why the demand is doubled and the dealers utilize the chance to gain maximum profit out of it. The reason for all this is, Kerala’s pathetic condition in agriculture. The small, medium farmers do not produce paddy due to high expense.

The opposition in Kerala has called upon government to look on price hike issue. K.P.C.C president Ramesh Chennithala protested one day by fasting. But the minister says that central government should take necessary steps to cut down commodity prices. This is not a correct and adequate explanation. The minister is in charge of public distribution system in Kerala. He has the responsibility to control the commodity prices whatever measures he takes.

Even the union minister P. Chidambaram recently said that agriculture would be given priority in the union budget; farmers have to wait and see because there have been promises always. He emphasized also the need of using modern technology in farming to make agriculture profitable. But it is very difficult to make it practical. Such is the condition of the farmers all over. Hundreds of farmers have committed suicide because of heavy loss of production and high expense in labor. There has been no package for farmers to get interest less bank loans still. There are many bankrupted farmers in the state.

Most interesting thing is that other wealthy nations are adopting agriculture as their main agenda for basic development. The American senate has approved $150 billion for the welfare of common men. By offering economic incentives and temporary rebates, this country is caring the common men. But India, while being an agricultural nation, is lagging far behind in this regard. There is no apt policy or attitude towards farmers and common people at large that our father of nation Gandhiji described as backbone of Indian progress.

Even though India in common faces many problems in agriculture, Kerala’s situation has been deteriorating day by day for the last many years. When the neighboring states are trying to help farmers and control prices of consumer goods, Kerala is speaking always about smart city and industrial development. How can Kerala become strong without the basic agricultural development and self sufficiency?

The Rise of the Car Nazis