Our roads are already full of cars, where is the space for Nano?

Nano, Tata’s small and the world’s cheapest car has been in news for last many days. All the car crazy people had been eagerly waiting for this cute baby since Tata announced their new project of people’s car last year. This ten feet long and five feet wide Nano has four doors and four seats. 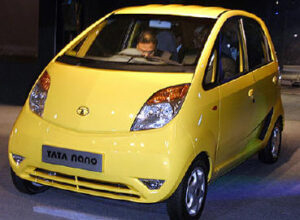 The business writers and Journalists all over the world made comments on this car. Nano received much publicity and rave reviews more than many new cars. Bruce Nussbaum, Business week writer commented $2500 car “looks great.” A two cylinder engine of 623cc at the back of the car, four small wheels, small trunk and 33 horse powers are the specifications of this car with a top speed of 65 miles an hour.

Nano has enjoyed a wide publicity even before its market sale which is still many months away. Being a fast developing economy, India is a hot target for many automobile companies across the world. Even the domestic car manufacturers are looking forward foreign collaborations to get their product benefits of advancements in technology. Need not to say that Nano would be a revolution on Indian roads in coming days. Tata, the Indian automobile giant would be conquering the market with no rivals, opined many experts.

Recently, news of Mahindra’s small wonder RENAULT YENI also spread among car lovers. This car looks more beautiful than Nano and this would outdate bikes from Indian roads; message spread like this. Car lovers have become totally excited of all these news; especially the car-loving Keralites. All these years, the life style of Keralites has changed a lot. Many people own either car or bikes. The city dwellers have more than one car. Due to tremendous increase in number of vehicles, Kerala cities are facing serious traffic problems. During office hours, traffic congestion is at its peak.

During a discussion on Nano, one of my European colleagues asked me, “Do you have enough parking lots to manage heavy traffic on behalf of the Nano revolution?” When I explained the actual situation of traffic, he wondered and made a humorous but imaginative comment: “Tata may find a solution for this also.”

All these days I was wondering why no media is reporting the serious issue that my colleague raised. What would be the situation when cars are like bikes and together, they all enter our roads?

During a procession, rehearsal of celebrations, and protests, passengers feel the misery of traffic jam even more. Hindustan Times (HT) Delhi edition has reported the serious traffic problem in Delhi; as “Crawl Capital”. The report and the image of traffic jam in H.T on January 18 was a pointer to all developing metros. Day by day the numbers of vehicles increase. After the introduction of Nano in market, many middle class Keralites would come forward to own a car. Neck and neck competition would be there in auto market. Owning a Car would become as simple as owning a bike. In short small car would become common man’s vehicle in near future.

The financial companies also look forward for introducing new loan-schemes. Bike companies would cut-down its price. Totally, a great vehicle revolution awaits Kerala. But the big question is: how can Kerala can manage the traffic problems? In peak hours, a trip in Kozhikode city is already very tiring due to the horrifying traffic conditions. What will be the situation in near future with a huge increase in number of vehicles? Do we have any plan and project to solve this problem? Do we have enough land to build parking lots in the heart of the city?

More and more people are migrating to cities for jobs and good education. Kochi, the new IT hub of Kerala is booming and traffic situation there is worrisome too. The changing work culture also leads to the increase of vehicles. The capital city Thiruvananthapuram is no better too. In this condition, Nano revolution would lead to the loss of sleep for traffic authorities and the public in general. Kerala urgently need a perceptual long vision to re-define our road and traffic system without much political interference and encroachment.